Liturgy of the Word 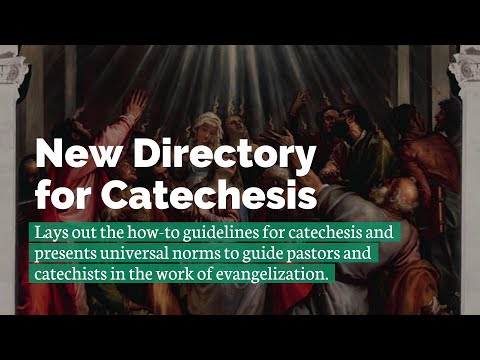 USCCB — First released in 1971 and then updated in 1997, this latest edition considers both the opportunities and the challenges which the Church faces in an ever more global and secular society.

Children's Liturgy of the Word

Children's Liturgy of the Word

Top 10 Reasons to Become a Catechist

Your Role as a Catechist PART 1

Your Role as a Catechist PART 2

CALLED TO BE A CATECHIST

Mary Mowry on "Myths About Being a Catechist"; Myth 1: "I have to be a Theologian."

General Directory for Catechesis, Congregation for the Clergy, 1997.

Catechism of the Catholic Church, 1997.

Pastoral Statements of the US Bishops

​In Support of Catechetical Ministry, USCCB, 2000.

Our Hearts Were Burning Within Us: A Pastoral Plan for Adult Faith Formation in the United States, USCCB, 1999.

Renewing the Vision: A Framework for Catholic Youth Ministry, USCCB, 1997.

Sons and Daughters of Light: A Pastoral Plan for Ministry with Young Adults, USCCB, 1997.

Go and Make Disciples: A National Plan and Strategy for Catholic Evangelization in the US, 1992, 2002.

To Teach as Jesus Did: A Pastoral Message on Catholic Education, 1972.

Resources of USCCB Committee on Evangelization and Catechesis

Preaching and Teaching About the Sacraments, USCCB, 2015

Sacramental Catechesis: An Online Resource for Dioceses and Eparchies, USCCB, 2012

Guide for Catechists, Congregation for Evangelization of Peoples, 1993.

Adult Catechesis in the Christian Community, International Council for Catechesis, 1990.

On Catechesis in Our Time / Catechesi Tradendae, John Paul II, 1979.

On Evangelization in the Modern World / Evangelii Nuntiandi, Paul VI, 1975

This site uses Akismet to reduce spam. Learn how your comment data is processed.